West Indies cricketer Chris Gayle was in the headlines this week for announcing that he had named his new baby daughter Blush.

The reason this has caused such a stir is two fold. Firstly, there is the name itself. As with almost any time someone in the public eye dares to use a name not deemed "normal" there are plenty of people declaring it to be wrong. They say things like "that's not a name!", "surely that's not right!" and the inevitable "is this a joke?".

Except in this case the context of this particular person naming his baby Blush gives people extra cause to wonder if it is a joke. Which brings us to the second reason it has caused such a stir. In January this year Gayle caused controversy for his sexism towards a female sports reporter. He had been flirting with her in a post game interview and made the comment "don't blush, baby" as she tried to ignore his unwanted flirtations. He tried to brush it off as being a joke, but was fined for his unprofessional conduct.

Reportedly this name is also a joke though, and his child is instead a boy (not named Blush). Which would mean that while Gayle may think that his tweets of "We would like to welcome the arrival of our beautiful daughter 'Blush'" and "Thank you all for the sweet and kind messages. Blush won't Blush, my baby" are funny, he has sadly learned very little from the whole incident. Which makes sense as "don't blush, baby" has basically become his signature catchphrase.

The overpoweringly negative reaction to the name Blush is interesting though. Let's take a step back for a minute. If someone had actually named their daughter Blush, and didn't have the background with the word that Gayle does, is it really that bad as a name?

I saw a discussion about the story on morning TV where one person used the extreme insult of "It's akin to child abuse" (I hate it when people use that phrase as an argument against a particular name. Seriously, a ridiculous - in your opinion - name does not automatically equal abuse. Such statements just trivialise the very serious subject of child abuse. But that's a discussion for another place and time).

The more considered argument I heard against naming your baby Blush was that as it's a word commonly associated with shy, young, awkward girls it would be belittling to give a female this name. Furthermore, it would be hard for an adult woman to be taken seriously with a name for an involuntary physical reaction, especially within a professional environment.

Which I understand and agree with. And is why I feel kinda bad for saying that I think Blush would actually be quite pretty as a name. It has a sweetly romantic feel, and makes me think of other soft pink flowery names like Bloom, Blossom or Posey. I could totally see it as a possible name should Jules and Jamie Oliver's next child be a girl.

But I think this is one that is best left for a surprising and demure middle name. And listening to the general reaction when Gayle announced the name (be it the real name or not), it's safe to say that most people would also prefer not to see Blush as a first name. 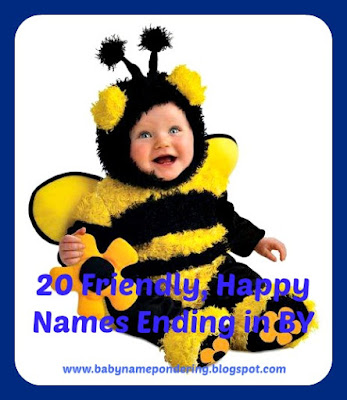 There are those that I consider to be "Quirky Vintage". Think Bartleby, Gatsby, Maeby, Quimby, Willoughby and the likes. They tend to feel like (and often are) literary gems, and have a classic charm that is quite appealing.

The names I had in mind though tend to be more of the "Friendly and Perky" variety. Also very charming and appealing, they sound like they belong to people who are open and approachable. People you could easily become good friends with.

Maybe it's because a number of them are nicknames, and hence designed to be more familiar and friendly from the get go.

Personally though I think it's the "bee" sound itself. It brings to mind a little bumblebee, happily buzzing around flowers on a warm sunny day. You can't help but smile with that image in your mind (unless you're allergic to bees. In which case you might be filled with anxious dread instead). Some people even prefer to change the BY to a BEE or BIE spelling instead to enhance this happy friendly feeling, and add a hint of youthfulness to the name.

I don't think it's necessary though - the names below are all likable enough already.

Abby - Name your daughter Abby and chances are she'll forever be asked if it's short for Abigail. Abigail may be a very popular name in most Western countries, but Abby is a lovable name in it's own right. She's a top 500 name in the U.S and appears on many of our favourite on screen characters. My personal pick - the effervescent Abby Cadabby, the magical fairy Muppet of "Sesame Street" fame.

Alby - Archie is gaining steam in Australia, and Alfie is receiving lots of love in the U.K. Could these be leading the way for Alby? Quite possibly, as Albert is also on the rise. Alby also makes an appearance in "The Maze Runner" as the leader of the Gladers, showing that this name may sound light but has plenty of substance.

Ashby - With hints of Ashley and Aubrey, Ashby is definitely my pick for the next big "Ash" name. But probably not for another 20 years or so, making it a solid ahead-of-the trend pick. With nickname options of Ash for boys and Bea for girls, what's not to love about Ashby.

Bobby - Ahhh Bobby. Am I the only one who immediately thinks "The Brady Bunch" when I hear this? Bobby may have started as a nickname for Robert, but this name is quite the powerhouse and has been in the U.S. top 1000 for about 100 years now. He feels like a great Americana choice for a boy, but would be a refreshing (and rare!) choice for a girl.

Coby - It's a sound we're not unfamiliar with, thanks to basketballer Kobe Bryant and "How I Met Your Mother" actress Cobie Smulders (which in her case is short for Jacoba!). Yet this spelling is not very popular at all, perhaps lacking the energetic vibe of Kobe.

Colby - It may be a type of cheese, but it's not a cheesy name. Ever since season two of "Survivor" I've been a fan of Colby. I suspect I'm not the only one. On a boy it has cowboy swagger. On a girl it's cute and tomboyish (and rare!).

Darby - I had a Great Uncle Darby (Darb) so to me this name is straight from the era that we are borrowing so heavily from at the moment. In the U.S it was used fairly evenly for boys and girls until a Julia Roberts played Darby Shaw in the 1994 movie "The Pelican Brief". It's a great gender neutral pick, and currently largely undiscovered as it is no where near cracking the top 1000.

Debby - Before the popularity of Jennifer and her nicknames Jenny and Jen in the 70's, there was Deborah and her nicknames Debby/Debbie and Deb in the 50's. Deborah has never left the top 1000 in the U.S, but Debby was not the most well-liked of her nicknames and currently feels very unfashionable.

Digby - I really 'dig' this name! And another pun - I think it's very 'dig'nified ☺ This is actually true though. Digby is just the right combination of stylish and Old English sounding, yet down-to-earth and approachable. It's super rare currently but definitely deserves more love. 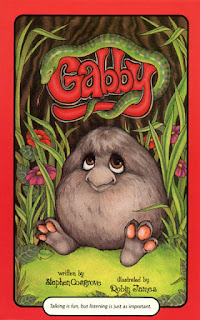 Gabby - As a child I had a book about a little creature named Gabby because they talked too much
and needed to learn how to listen. If you don't mind the association with being overly talkative, this cute little nickname for Gabrielle/Gabriella would be very sweet for a girl.

Kirby - Confession time - I've had a soft spot for the name Kirby ever since seeing the 1985 movie "St Elmo's Fire". That particular Kirby was male, but it was TV sensation "Dynasty" that put Kirby on the map for girls in the 80's. These both make Kirby feel like an 80's pick, but in an offbeat cool and retro way.

Korby - This name will be long tainted in Australia due to the Shapelle Corby drug smuggling associations. But I feel that the Korby spelling is a lot funkier, despite looking like it has been hijacked by the Kardashians. Almost no one is using this name right now, making Korby a great different-bot-not-too-different choice.

Libby - She may not be the trendiest or most popular nickname for the classic Elizabeth, but Libby has a that undeniable girl-next-door vibe. Whether that girl is sweet, quiet, outgoing, popular, mischievous or tomboyish doesn't matter - Libby feels like she could be any or all of these.

Rigby - Beatles tune "Eleanor Rigby" makes this one a great choice for lovers of their music. It only made it onto the radar in the U.S in the past decade and so far seems to belong to the boys, but I could see this going either way. One of the two main characters in the cartoon "Regular Show" is a raccoon named Rigby, and I have a feeling that this name will be very popular when viewers start having children.

Robby - For most of the 1900's Robert was a top 10 name in the U.S (and is still a top 100 name), and he spawned many nicknames. Robby is one of the more popular ones. I'm torn on Robby - on one hand he feels like a high school sweetheart, but on the other hand I recently saw "Dirty Dancing" again so he currently seems like a villain. Either way, when I think of Robby I picture a child or teenager rather than a mature adult, which is probably why Robert is far more popular as it gives the wearer the freedom of choice as they age.

Ruby - Ruby may feel like a vintage rarity, but she's actually very popular in many parts of the world. She's been a top 10 staple in Australia for a while now, top 20 in the UK and recently moved into the U.S top 100. Ruby has a winning combination of the "oo" sound that's trending right now, plus the friendly "bee", and she's a precious jewel to boot. What's not to love?

Shelby - It may be a go-to name for turtles, tortoises and snails, but I can't help but love the preppy and perky Shelby. Shelby has a longer history of use as a boys name, but rocketed to popularity as a girls name in 1936 after Barbara Stanwick played a Shelby in the movie "The Woman in Red". Another onscreen Shelby - Julia Roberts (again!) in "Steel Magnolias" in 1989 - helped push Shelby to a top 100 girls name in the 1990's. Most people now consider it to be "a girls name".

Tibby - In 2005 Amber Tamblyn introduced many of us to the name Tibby in the movie adaptation of 'The Sisterhood of the Traveling Pants'. For her character it was a nickname for Tabitha, and she managed to make a name that possibly seemed overly cutesy feel cool and spunky.

Toby - Interestingly, the longer Tobias is currently far more popular than Toby in the U.S, but here in Australia (and the U.K and New Zealand) Toby is a top 100 name. I have a real soft spot for Toby. Toby feels like your best friend, and a fun, cheeky one at that. Call me crazy but I also think it's super cute on a girl.

Zibby - Looking for a truly unusual nickname for Elizabeth? Try Zibby. She's cute, unusual and rare. Great if you have a family full of Elizabeths and want a distinctive version with loads of personality.