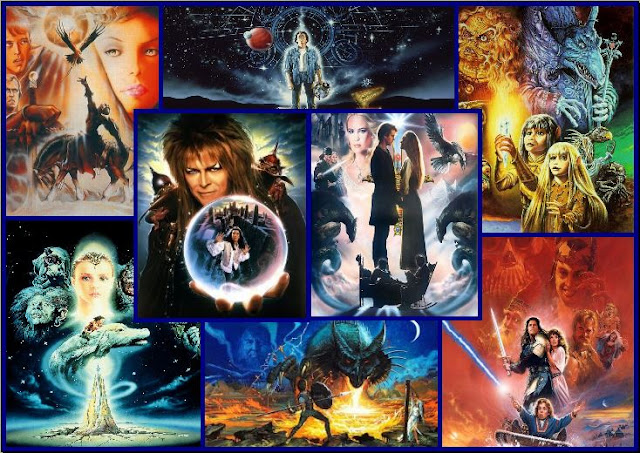 I grew up in the 80's and have very fond memories of some of the fantasy adventure movies from that decade. Movies such as these were an early introduction to a different style of naming. Sometimes they were a slight twist on an old familiar, other times they seemed fantastical. But one of the great things now is that they remind you of those old favourite movies and bring a smile to your face. Here are 20 of my top picks in alphabetical order:

Atreyu  (The Neverending Story) - This is probably one of my favourites on this list. Pronounced ah-TRAY-yoo, he was the warrior boy of the story. It is thought that the name has both Indian/Hindu origins - where it means 'warrior' - and German origins in the name Atreju, which means 'son of all'. Both are quite apt for this character, who was raised by a village when his parents died. The name is still quite rare, but has slowly been gaining in popularity since the early 1990's. In 2011 it was ranked #1339 in the US.

Aquila (Ladyhawke) - Aquila is traditionally a male Latin name meaning 'eagle', but is more often used as a girls name in America. Pronounced either ah-KEE-la or ah-KWIL-la, it was the name of the land in 'Ladyhawke' and is a pretty but rare name.

Auryn (The Neverending Story) - The Auryn was the name of the amulet Atreyu wore to protect and guide him in his quest. It was also on the cover of the book Bastian was reading 'The Neverending Story' from. This name could go either way, as it sounds similar to girls name Lauren and boys name Oren, and has only recently started appearing on the US charts for both. I love the sound of this - it's kind of like Aura but with the benefit of being more "namey" and less "wordy" feeling.

Bastian (The Neverending Story) - One of the most recognisable names on this list, Bastian comes from the Latin boys name Sebastian, meaning 'from Sebastia'. Actor Jeremy Sisto named his son Bastian Kick in 2012, and while the name is growing in popularity in America, it was still ranked just #2387 in 2011. It's much more popular in Chile, where it is a top 20 name, and Germany and Norway.

Buttercup (The Princess Bride) - A name that would sound at home on one of Jules and Jamie Oliver's offspring, Buttercup is a super-cutesy floral name that have never charted in America, despite being the name of the well loved bride of this tale. Probably better left as a term of endearment.

Cherlindrea (Willow) - Pronounced SHER-lyn-dree-ah, she is the fairy queen of the forest who tells Willow that he has been chosen to save the child who will bring about the downfall of the evil queen. I'm not sure how the writer came upon this name - it's like a mixed bag of Cher, Cheryl, Lyn, Linnea and Andrea all rolled into one. Perhaps a little too fantastical to use, this name has never charted in the US.

Elora and Danan (Willow) - Elora Danan was the child Willow was charged with saving. Either of these names are great - fans will appreciate where you got it from and everyone else will just think they sound great. 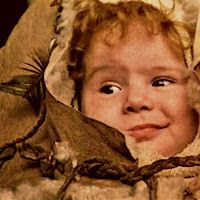 Elora is thought to be a variation of the Hebrew name Eliora, meaning 'the Lord is my light', or the Greek Eleanor meaning 'bright, shining one'. It's likely though that the writer - himself a Canadian - got it from the Canadian town Elora. Elora has a long history in the US charts, however the movie has certainly helped to boost it's popularity. Prior to 1988 it charted irregularly, but since 'Willow' was released that year it is a regular on the charts. Understandably so - it's a pretty but not overly frilly choice for a girl.

The characters second name is spelled Danan, but is quite often thought to be Dannan or Dannon. Interestingly, Danan has only ever charted for boys, Dannan only for girls, while Dannon can be seen on boys and girls. The original form is most likely Danann, as in the Irish legend of the Tuatha De Danann, which I only say because Willow uses the word tuatha when he is trying to cast a spell. This would give the name the meaning of 'people of  Dana'. Personally I prefer this name for a boy, with the spelling of Dannon. It reminds me of the strength of a cannon, but without the negative weaponry connotation.

Falkor (The Neverending Story) - Falkor was that fluffy flying white luck dragon in the movie. A very cool name, like Falcon but less "birdy". Falkor (or Fuchur in the original German text) has no accepted origin or meaning, and has never charted in the US.

Isabeau (Ladyhawke) - I love Isabeau, it is such a romantic name. Pronounced IS-ah-bo, it's a variant of Isabel and means 'God is my oath'. It's likely that it's less popular than Isabelle or Isabella variants because although Belle/Bella and Beau all mean 'beautiful', the first two are usually the feminine version while Beau is masculine. Beau is also a term used for a male suitor. Nevertheless, it's a beautiful (no pun intended) name and would be stand out from the Isabels and Isabellas, and ensure that you avoid the nickname Bella. Isabeau entered the US charts in 1987 and has maintained a constant but quiet presence.

Jareth (Labyrinth) - This is one name that would be instantly associated with the movie it comes from. But in a good way - Jareth the Goblin King was played brilliantly by David Bowie, and is iconic within 80's movies.  Inevitably it would be confused a lot with Jared, but it carries a massive cool factor that would probably go a long way towards making up for that. Jareth hit the US charts the same year the movie was released - 1986 - but again has never been super popular. 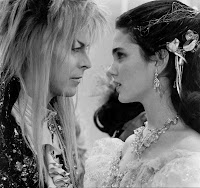 Kael (Willow) - Like the sound of Kale, but not the less than flattering association with cabbage? Then you may want to spell it Kael. This variation first cracked the US top 1000 in 2006, and was still there in 2011. Kael is a variant of the Gaelic name Kaelen, meaning 'uncertain'. It's also used in 'World of Warcraft' (Kael'Thas Sunstrider) and is generally seen as a name for a dark, strong and forbidding type. I can't help but think that it would make a good name for a love interest in a romance novel. Hmmm, maybe someone should write one featuring lead characters called Isabeau and Kael?

Kira (The Dark Crystal) - Kira is one of those names with many multiple spellings. This is one of the sleeker  versions, and also the one worn by Olivia Newton John in 'Xanadu' and female officer Major Kira on 'Star Trek: Deep Space Nine'. Each of the variations have different origins and meanings, therefore meanings vary from 'dark' in Gaelic to 'throne' in Persian to 'glitter' in Japanese. Kira has been in the US top 1000 since 1979 - and the top 500 for most of those years - but has been declining slightly in the past few years.

Ludo (Labyrinth) - Also the name of a board game, Ludo was the lovable friendly monster in 'Labyrinth'. It has never charted in America, but did appear as a minor character name in 'Harry Potter'. Ludo is assumed to be a nickname for any number of boys names starting with Lud, such as the German Ludwig or the French Ludovic, both meaning 'famous warrior'. But I see no reason to have a long version name with this one - Ludo could fit in quite well with current hot names Milo and Arlo.

Rylan (The Last Starfighter) - It sounds kind of like Riley and kind of like Ryan, and in this movie it was the name of the people on the planet Rylos, which the star fighter is recruited to protect. Rylan is English in origin, means 'land where rye is grown' and is a top 1000 name in the US for both boys and girls. Which I was surprised to hear. Guess this isn't quite as "undiscovered" as I thought it would be. Makes a good different-but-not-too-different name.

Sorsha (Willow) - I've also seen this one pop up as a hero name in the video game 'Heroes of Might and Magic'. I quite like the sound of it - it's an alternative spelling of the Irish name Sorcha, meaning 'bright, shining'. Sorsha has rarely charted in the US, possibly because the character was nasty for most of the film which might have discouraged parents. It's a great fantasy sounding name though, and you would be extremely unlikely to meet another one if you chose this name.

Tyrian (Dragonslayer) - I personally prefer Tyrion as in the 'Game of Thrones' character, as this spelling brings it just that little closer to looking like tyranny and tyrannical, which aren't exactly positive attributes. Tyrian is also the name of a dark reddish purple that was once prized for it's rarity and ability to become richer with exposure to sunlight, rather than faded. 'Tyrian' is also the name of a video game, or spelled Tirian is the final king of Narnia in CS Lewis' 'The Last Battle'. Both spellings are rare but have charted at least once in America.There is no information on the history or origins of either names - best guess is they might be  variations of Welsh girls name Tirion, meaning 'gentle', which seems a little at odds with it's appearance.

Westley (The Princess Bride) - Looks like Wesley but has more of a cowboy feel to it. Westley is an English name meaning 'western meadow'.  Westley has a long history in the US charts, but is more often outside the top 1000 than in it. Boys names ending in "ley" such as Bentley are pretty popular right now- Westley would be a great choice if you're looking for current sounding but not over-used. 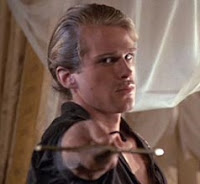 Willow (Willow) - This is by far the most popular name on this list, but 'Willow' would have to be one of my favourite ever movies of 80's, so I couldn't really do this list without including it. Willow was man whose self doubt held him back from being the sorcerer he desperately wanted to be. When he accepts the challenge of protecting Elora Danan he finds the courage to be a truly great sorcerer. Willow is a great unisex name, although far more popular for girls, particularly in the US.

Valerian (Dragonslayer) - Yes, Valerian may be a most often recognised as a herbal remedy for sleeplessness. But it can also be argued that this is a very regal sounding nature name, one that would work for both genders. It has been the name of a Roman emperor and several saints, and is a Latin name meaning 'healthy, strong'. Valerian is a rare name, and likely to stay that way for the foreseeable future.