I was recently watching 'Mary Poppins' for the first time in years, thoroughly enjoying all of the fantastic songs I loved so much as a child. My mum had a book with the music from the movie, and I remember reading it eagerly, trying to remember the words and even play some of the songs with my very limited piano skills.

As a child I maybe didn't care too much about the tongue twister part of the song 'Jolly Holiday', but re-watching the movie I was intrigued. If you can't remember it, 'Jolly Holiday' is all about how much Bert and the penguins admire Mary and spending time with her, and part way through Bert sings a quick verse where he rattles off the virtues of differently named girls. All up, twenty girls names are mentioned.

And what a combination of names he uses! I'd love to know how the names were chosen, as it's quite a mixed bag. This is probably because we're talking about:


So the names used seem to be a mish-mash of names popular in the different eras, some more popular in Britain, some more popular in America, and some presumably thought to be somewhat "British sounding". Then again, maybe some were simply names of women known to the Sherman brothers, or ones that they thought fit the tune well. See the names as per the song for yourself below and let me know what you think :)

It's true that Mavis and Sybil have ways that are winnin'
Mavis was popular in England in the 30's, but Sybil not so much. Sybil peaked in America around 1920.

And Prudence and Gwendolyn set your hearts spinnin'
Prudence feels British enough. Gwendolyn though is the preferred spelling of Americans, whereas the English prefer Gwendoline. Gwendoline was a top 100 name in Britain in the early 1900's.

Phoebe's delightful, Maude is disarming
Phoebe feels a little surprising here, because she feels like such a current choice. But Phoebe was actually just as popular in the US in the late 1800's/early 1900's as she is now. And Maude is disarming because as with Gwendolyn/Gwendoline, spelling Maude is preferred by Americans and Maud by the British (particularly popular in Edwardian times).

Janice, Felicia, Lydia charming
In America, Janice and Felicia ranked significantly higher in 1964 than 1910. Lydia however was more popular in 1910, and a top 100 name in England/Wales in 1904.

Cynthia's dashing, Vivian's sweet
Interesting fact - Mrs Banks was Cynthia in the books, but renamed the "more British-sounding" Winifred in the movie at P.L. Travers' request. Which might be why she still made the song, especially considering she was a top 10 name in America in 1964. Vivian also seemed to be more popular in the U.S.

Stephanie's smashing, Priscilla a treat
As a name that feels synonymous with the 80's, Stephanie feels a little surprising. But she was a top 100 name in both England/Wales and America in 1964, so less surprising than she may first appear. But still not a very Edwardian feeling name. Priscilla makes more sense, despite not being super popular in England.

Dorcas and Phyllis and Glynis are sorts
I'll agree they're three jolly good sports
Many people are confused as to whether it is Doris or Dorcas, which is understandable. Dorcas may sound much more British, but Doris was actually far more popular than Dorcas in England in the 1910's and 1930's. As a top 100 name in England & Wales at the same time, Phyllis is a good fit. But Glynis is a surprise, as she wasn't popular at the time the book or movie was set, or when the song was written in either country. Gladys would have been much more suitable. Maybe the inspiration came from Glynis Johns, the actress who played Mrs Banks in the movie.

But cream of the crop
Tip of the top
It's Mary Poppins and there we stop
Yes, for many years Mary really was the cream of the crop. She was number 1 in both England & Wales and the U.S. (and many other counties) in 1910, wasn't far off that in 1934 and was still going strong in 1964. 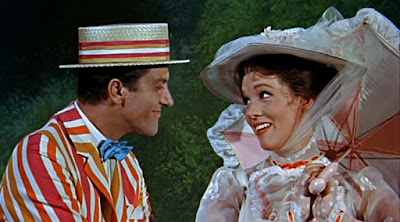