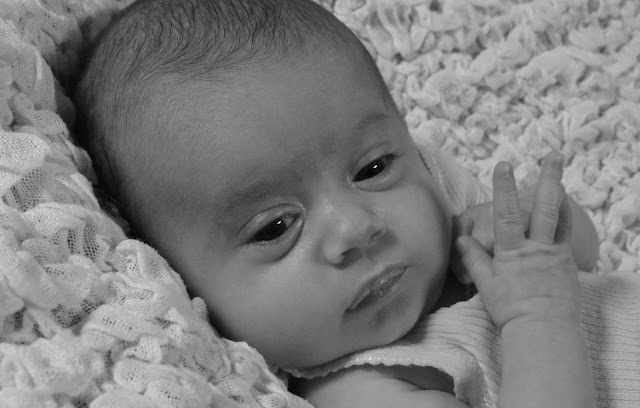 During my pregnancy I was taking a bit of a break from blogging (a.k.a. sleeping and playing a lot of Candy Crush). But this doesn't mean that I'd lost interest in names. In fact, part of the great thing about giving birth is that I'm suddenly completely immersed in the current naming landscape - as a new mum I'm seeing what names my fellow new mums are using. And can I say I've seen some fabulous ones lately.

But before I digress too much, what did we name our son? His name is Atlas Bram!! That's him pictured above at two months old. Atlas was born October 30th 2015, weighing just 1.6kg (3lb 8oz). He was born five and a half weeks premature after a growth scan showed he was too small and our obstetrician told us to come in to the hospital for a cesarean birth that same day. I have to admit to having a few hesitations about naming him Atlas when we found out he would be so tiny, but my husband had none. Our boy may be small but he is strong and healthy and I'm glad we stuck with our choice (keep tuned for a post on how we chose his name in the coming weeks).

As I was saying, I've seen some great names lately, with one major source being on the Baby Center Australia forums. The below is a selection of boy names used by parents who had a December due date like I did. For those interested in popularity; Alexander and variant Zander/Xander was the most popular first name, and James the most popular middle name out of all of the boys names I saw.

Email ThisBlogThis!Share to TwitterShare to FacebookShare to Pinterest
Labels: Announcement, birth announcement, It's A Boy!