In the year I was born, Charlotte was not exactly a hugely common name. It wasn't near the top 100 in Australia, and in America it was also firmly outside the top 100, ranked at #285. Yet I remember loving the name Charlotte as a child, and apparently I wasn't alone. Fast forward to 2011 and Charlotte is placed #7 in Australia, #27 in America, #5 in New Zealand, and #21 in the UK. It's also a top 100 name in Belgium, Canada, Germany, Scotland and Ireland. It's been caught up in the wave of names that were once felt to be too "old-fashioned", but are now being embraced by parents (for more examples of these types of name, check out this article at babysitting.net).

So what is it about Charlotte that has caused people to fall in love with it all over again? Well, a lot actually. 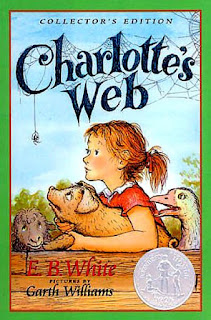 A good friend of mine is in love with Charlotte. She has been for a long time, and despairs when she hears of people she knows using it before she has the chance to. Her inspiration comes from Charlotte Lucas - not the actor, but the best friend of Elizabeth Bennett in 'Pride and Prejudice'. Charlotte's character is practical and logical, in contrast to the daring Elizabeth.

Other popular literary references include Charlotte the ingenious spider who finds a way to save the life of her pig friend Wilbur in 'Charlotte's Web'; and author of 'Jane Eyre', Charlotte Bronte. In these examples we see Charlotte as gentle, clever, strong willed, caring, practical, restrained and lady like.

And Musical References
Charlotte has appeared in songs, on songwriters and singers. Rock band 'Good Charlotte''s name was reportedly inspired by the book 'Charlotte's Web'.

A Regal Namesake
Queen Charlotte was the wife of British King George III. Admittedly, from a the couple of portraits I've seen she is not a dazzling beauty. But she bore the King 15 children (13 of which made it to adulthood) which would have been a sign of supreme womanhood and success in a time when a Queen's main "job" was to provide the King with heirs. She was a famous patron of the arts and her love of botany helped enrich and expand Kew Gardens. She was a friend to Marie Antoinette, and the beautiful Bird of Paradise flower was named in her honour.

Prefer your royals to be a little more currently relevant? Princess Caroline of Monaco's second daughter is Charlotte Marie Pomeline Casiraghi. She's 26, an equestrian and journalist, and Grace Kelly's granddaughter.

A Treasured Location
Many places were named in honour of Queen Charlotte, including the cities of Charlottesville (in Virginia), Charlotteton (Prince Edward Island) and Charlotte (in North Carolina). This last one in particular gives Charlotte a "southern belle" feel to it.

Influential Screen Characters
Much more "belle" than southern, in 1998 the character Charlotte York hit our TV screens in 'Sex and the City', capturing many hearts. Charlotte was sweet, romantic, optimistic, practical and traditional. She was possibly intended to be a cross between Austen's Charlotte Lucas and Elizabeth Bennett.

At the time that the show started the name was experiencing a slight down slide in the American charts, but a year later the name was given forward momentum again, and Charlotte has climbed the charts every year since 1999. Other Charlotte's on the screen since have been mainly teenagers (or teenage vampires), appearing in 'Twilight: Breaking Dawn part 2', 'The Vampire Diaries', 'Revenge' and 'The Lying Game'.

A Way To Remember Loved Ones
You may not have a Charlotte in your family tree, but chances are higher you have a Charles. Charlotte is the French feminine diminutive of Charles (with the same meaning of 'free man'), making it a great way to honour great aunt Charlotte, Grandpa Charles or Uncle Charlie. Or all three at once.

And Nicknames Galore
In it's entirety Charlotte is ladylike, feminine, classic, beautiful and elegant. But many Charlotte's have felt it was a hard name to grow into as a child, it was hard for others to spell, and that younger siblings struggled to say it. And nicknames can be the perfect answer to such problems. Charlie (or Charli) has become so popular as a nickname that girls are now being called Charlie as their formal name, but the are plenty of other options, both "girly" and not. Possibilities include Lottie, Lotta, Lolly, Char, Charl, Carrie, Carlie, Charles or Arly, to name a few.

Whatever it is that attracts you to a name, Charlotte is one name with plenty to love. Rather than "old", it currently screams "timeless". And no matter how popular a name is, there's nothing wrong with not being the only Charlotte you know when you have such a highly regarded name that is more often seen in a positive light than not.