Rise of The Golden Girls

You probably remember a show from the eighties called 'The Golden Girls'. 'The Golden Girls' was about four “previously married” women living together in Miami. While they often seemed mismatched, the success of the show lied in the strong bonds of friendship these ladies shared, epitomised by the shows iconic theme song 'Thank You for Being a Friend'.

The show struck a chord with many people, and was extremely popular. The dynamic between the four ladies has often been replicated in movies and shows, and is thought to be the inspiration behind 'Sex and the City' and 'Girls'.

Although the ladies had some great names (on and off screen), while 'The Golden Girls' was airing from 1985 to 1992 people were rather unlikely to want to name their sweet babies after characters in a show about mature ladies, or the actors that played them. They would have seemed a little fusty in a world of Jennifers and Ashleys; Jessicas and Amandas.

But you know a show has started picking up some retro cool cred when you hear teen characters Summer and Anna on hit teen show 'The O.C.' bonding in a bathroom over the fact that one of them has always felt like a Blanche and the other has always identified with Rose. And since retro vintage names are now rising again, there's every reason to believe that the names of both the actors and the characters they played will soon be big on the name charts.

Sophia
Sophia was Dorothy's mother, the oldest of the group and the usually funny voice of reason that could often be relied upon to offer advice. Sophia is a Greek name meaning (quite aptly) 'wisdom'. It's a friendly feeling name that has just that bit more exotic sophistication than it's counterpart Sophie.

Pronounced soh-FEE-ah, this is undeniably the most successful name (currently) on this list. While the show aired she was hardly an unpopular name, and was ranked in the 200's in America. But in 2006 Sophia hit the top 10, and was the number one name for girls in America in 2011 and 2012. She's also a top 100 name if Canada, Austria, Germany, New Zealand, Australia and England, so she has a lot of international appeal. 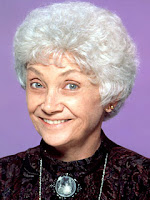 Estelle
Sophia was played by actress Estelle Getty, Estelle coming from the Latin stella, meaning 'star'. Pronounced eh-STEHL it is most popular in Quebec and has a real charm to it – an almost French feel. Is also has some cute nicknames, such as Telly, Essie, Elle or of course Stella.

Stella itself has been a top 100 name in America since 2010, and E names in general have been getting a lot of attention in recent years. The signs are good that Estelle is a possibility to enter the top 100 itself in coming years. Indeed, in 2012 Estelle re-entered the American top 1000 for the first time since the 60's, as did variant Estella.

Rose
Rose was the bubbly, sweet, naïve optimist of the group. While the others often found her inexperience and outlook on life to be juvenile, they were very protective of her and valued her ability to help them see the good in the world.

Rose has had a long reputation of being a go-to middle name, but it's actually had more use as a first name than this reputation might suggest. Since America started keeping name records in 1880 the lowest it has ever ranked was #391 in 1997. A simple, elegantly beautiful name, Rose has been rising again in recent years. 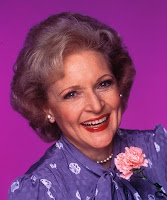 Betty
While Betty White has had a long and busy career, her portrayal of Rose has earned her a soft spot in many people's hearts. And because she is still quite busy starring in 'Hot in Cleveland', she is arguably the first person people think of when they hear the name Betty. There are of course many other Betty's in pop culture, such as cartoon Betty's from 'The Flintstones', 'Betty Boop' and 'Betty & Veronica', TV's 'Ugly Betty' or pin-up legend Betty Grable to name a few. A little girl named Betty would have plenty of role models to look up to.

The name Betty started as a diminutive of Elizabeth, meaning 'God is my Oath'. She was hugely popular about a century ago – in America she was ranked 2nd most popular name from 1928 to 1934. I find it hard to imagine her reaching such heights again though – in 2012 she was dropping, ranked at #1578. She might need just a bit longer to gain the same kind of cool factor as her counterparts.

But my favourite thing about Betty, apart from it's cute as a button sound? If you're a fan of the movie 'Clueless', Betty was slang for an attractive stylish and confident girl – or to put it another way, a hot chick.

Dorothy
Dorothy was the dry witted, realistic teacher looking for love. Dorothy has a lot in common with Betty – there are tons of Dorothy;s both fictional and real, and she was also the number 2 name in America for several years. From 1920 to 1927 to be precise – she actually lost her position to Betty.

Unlike Betty though, Dorothy has been on the rise again in recent years, climbing slowly to #922 in 2012. Dorothy is a Greek name meaning 'gift of God' and comes with a slew of possible nicknames such as Dot, Dolly, Dora, Doro, Dodie, Thea, Tia and Dory/Dori which help to give this name a fresher image for todays' parents. 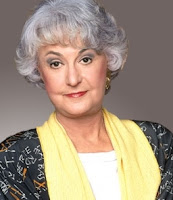 Bea
Bea (born Bernice) Arthur had a very distinctive look, and like her character Dorothy was very witty.

Bea feels like it is often overlooked as a given name, and despite being a fairly consistent presence in the American charts it hasn't been in the top 1000 since 1910. Pronounced Bee, it's much more likely to be used as a nickname for Bernadette, Beatrix or Beatrice. All of these names increased in popularity in 2012 in America, taking Bea with them.

Bea itself derives from Beatrice and hence Beatrix, a Latin name meaning 'she who brings happiness'. It's a short spunky name for people who love one syllable names that you don't hear everyday.

Blanche
Blanche is another great one syllable name that has long been overlooked. It's an old French name meaning 'white', but because it was often used as a nickname for a person with blond hair it is sometimes thought to mean 'blonde'. Pronounced BLANCH, it's most popular in Quebec, where it is ranked #339.

Blanche in 'The Golden Girls' owned the house they lived in, and was the sexually adventurous, man-hungry socialite of the group. She was also somewhat of a southern lady, and together with the character Blanche from Tennessee Williams' 'A Streetcar Named Desire' has given the name a southern belle image. 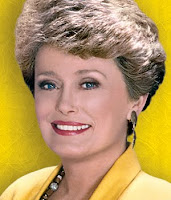 Rue
Rue McClanahan (born Eddi-Rue) plays Blanche. Despite the fact that she was pretty much a household name, her name didn't really catch on and was almost forgotten about. Then came something called 'The Hunger Games', which featured a young heroine named Rue. And we all thought “wow, that's different” forgetting that it was actually a name we were all familiar with.

There is a subtle charm to Rue. In English it is a word meaning 'regret', in French it means 'street' and it's also a herb. So it's equal parts word name, French flavour and calming nature reference.

'The Hunger Games' put Rue back on the American charts in 2010 after a 30 year absence. It was most popular in the first half on the 1900's, but never made it anywhere near the top 1000. In 2012 it was given to 32 girls, the most ever in one year. This might be the highest it gets, but hopefully not. It'd be great to see this sweet name get more use.

I'm going to call these names the “Golden” eight. All of them are great names poised to increase in popularity in 2013. Well, except for Sophia – it's hard to get much higher than #1! Which one is your favourite? 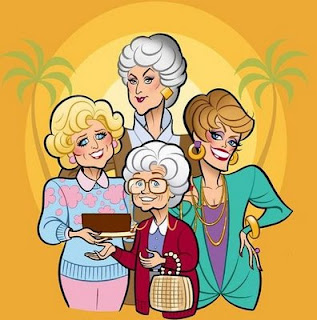