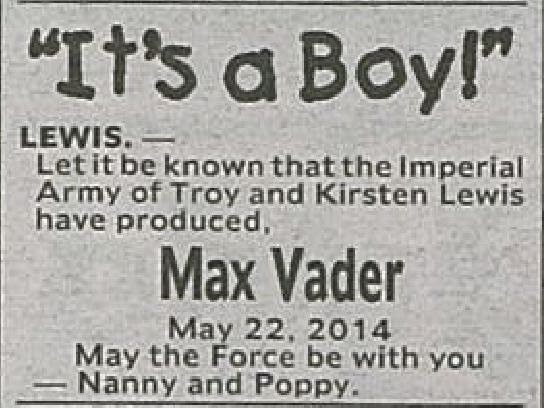 Between the above recent birth notice, and this one for Fenris Leander from February, I'm starting to get the impression that Star Wars fans write some of the most creative and fun birth announcements!

For many people Max Vader is a combination that covers many parents wish lists for a name. The first name is a familiar, well liked classic, plus it has the macho "X" ending that is so hot right now. Max fits in perfectly without trying too hard. Then you have Vader - unexpected and adventurous, with (I assume) personal meaning for the parents. It's a serious face to the world with a hidden cheeky quirkiness, and all in all it's a pretty cool combination.

I was sure I had covered Max (or more specifically, Maxwell) here at Baby Name Pondering before, because it's a name that is near and dear to my heart, but I haven't. My maternal grandfather was a Maxwell that went by Max, hence my attachment. Max is a Latin name meaning 'greatest', which also helps boost it's appeal. I still remember when Homer renamed himself Max Power in one episode of 'The Simpsons', and boy did that new name give him swagger!

Other examples of real life and fictional Max's are plentiful, with one of the most popular being the young main character in the book and movie 'Where the Wild Things Are'. This has helped to make Max a very popular name in many countries. In 2013, Max was #17 here in Australia, #24 in New Zealand, #14 in Germany, #15 in The Netherlands, #18 in Scotland, #36 in Sweden and #111 in the U.S. Other popular variations internationally include Maxim (#1 in Belarus & Moldova, #3 in Russia), Maximilian (#9 in Germany) and Maxime (#57 in Canada). Max is definitely a name that travels and wears well.

Of course, the noteworthy part of this name is Vader, a name that will forever be undeniably associated with 'Star Wars'. For those uninitiated to the world of 'Star Wars', Darth Vader is the villain at the center of the original three movies (now technically movies 3,4 & 5). The three prequels were made to introduce his back story, chronicling his fall from promising young Jedi student to master of the dark side.

There are a few theories as to where this characters name came from, and it's very likely that all are just as true as each other, as creator George Lucas often takes a very considered view to naming important characters. The prevalent one is that Darth is a play on 'dark Sith' or simply 'dark', with Vader being the Dutch word for 'father' - although the pronunciation of VEY-der used in the movies is supposedly closer to the way the Germans pronounce their word for 'father', vater. This is the favoured explanation because the big reveal of the original trilogy is that he is in fact, hero Luke's father.

Other explanations are based on the word play thought to be behind Darth. Vader may be a play on the word 'invader', which tends to have evil overlord connotations in itself. George Lucas has also said in interviews that he likes that the combination of Darth Vader sounds like both 'dark father' and 'death water'.

So why would someone want to choose the name of an evil character that The American Film Institute has listed as the third greatest movie villain in cinema history for their young child? Well, it helps a lot that Darth Vader is a fictional villain. His crimes aren't real to us, and we have three movies of back story to make him a more sympathetic character. Then consider that many of his traits are actually highly valued by our society. The tenacity to make hard decisions and stick to them, eliminating threats that stand in the way of reaching goals. And Darth Vader even gets his own super cool theme song. It's kind of like the ultimate user friendly bad boy name.

At the same time though, it's still too associated with the one reference to be a highly desirable first name. The only time it has charted in the U.S was in 2012. Well, other than in the early 1900's, when it charted a handful of times for girls; most likely as a spelling variation of Vada or Vida. Which is why Vader works so well as a middle name.

It's a great combination, one that should this boy well. Welcome to the world Max Vader!