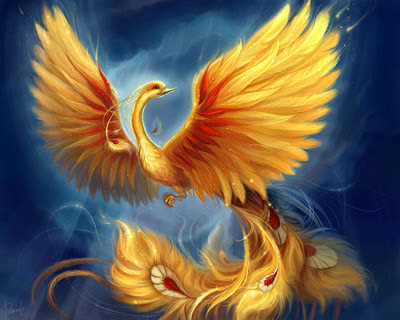 As one year has ended and another one started, I thought it would be a good day to consider the name Phoenix. In Greek mythology, the Phoenix (pronounced FEE-niks) was a bird who would die by spontaneously combusting into flames. A new Phoenix would then rise from the ashes of the dead bird. Hence the Phoenix has long been a symbol of rebirth and immortality.It has also been associated with the colour purple and royalty, however the name means 'deep/bright red'.

The Phoenix makes many appearances in popular culture today. In the 'Harry Potter' series, Dumbledore has a Phoenix named Fawkes who comes to Harry's aid more than once. Harry actually gets to see Fawkes die and regenerate at one point. The fifth book in the series is also called 'Harry Potter and the Order of the Phoenix', The Order of The Phoenix being an organisation of good witches and wizards dedicated to bringing an end to the dark days of Lord Voldemort and creating a new, enlightened time when the magical world can live without fear.

Other places you may recognise Phoenixes from are:

One great aspect to this name is that it is somewhat of a nick-namers paradise. Suggestions I've seen thrown around are Nick, Nyx, Fifi, Fee, Pix, Pixie, Fire, Firebird, Pyre, Phoe, Ixxy, Ash, and Nikki. I've also seen the variant Fenix used in a birth announcement in the past year. Which I thought was someone looking for a more "modern" way to spell it, until I realised that this spelling is not only the Old/Middle English spelling of Phoenix, but also the last name of 'Gears of War' video game hero Marcus Fenix.

Whichever way you want to use it, Phoenix is unique without being too unique, futuristic sounding but classical. It would be a great way to symbolise the beginning of a new life, or even just a New Year.